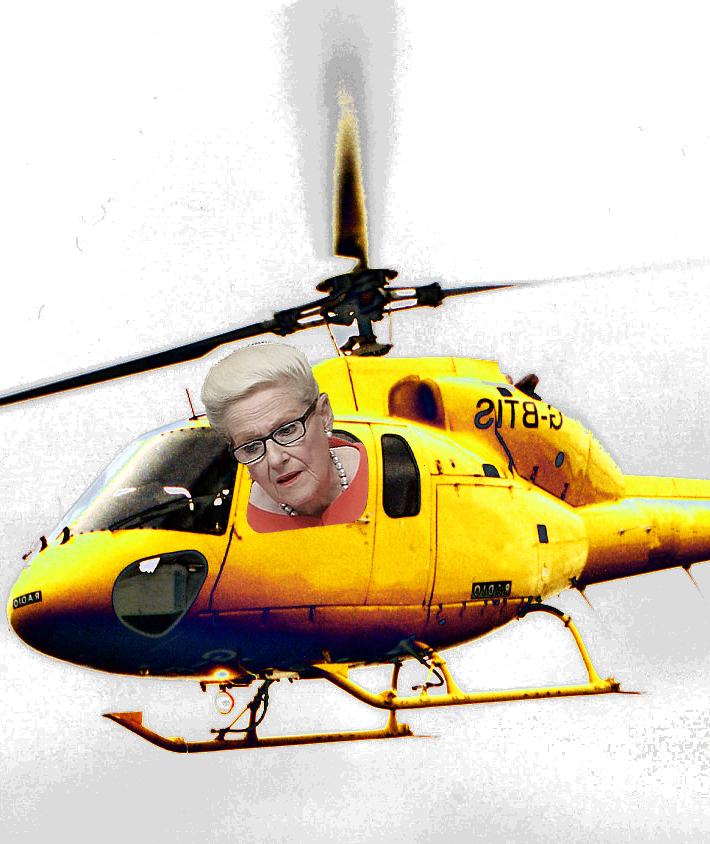 UPDATE: Bronwyn Bishop has bent under public pressure, saying she will now pay back $5,000 that she considered herself entitled to just hours before.

A furore is starting over the incredible travel entitlement spending of Federal Speaker Bronwyn Bishop.

Ms Bishop spent more on travel in the last six months of 2014 than she is paid as an annual salary.

Among her staggering spending, she racked up an $88,000 bill for less than two weeks spent in Europe, while she was running for presidency of the Inter-Parliamentary Union, a position she did not win.

At the centre of the storm is the $5,000 bill for an 80km chopper flight from Melbourne to Geelong for a Liberal Party fundraiser at a golf club.

Taking a cab the same distance would have cost about $300.

The revelations are among details released by the Department of Finance, which rank Ms Bishop seventh out of the top 10 spenders for the second part of 2014. When costs for one-off office fit-outs are removed, she becomes one of the biggest spenders in parliament.

One of her highest spending periods came in two weeks of October 2014, when she was making her bid to run the Inter-Parliamentary Union. Ms Bishop led a small parliamentary delegation to Italy, Belgium and Austria before heading to Switzerland, which cost $88,084 in total.

She and two staff members also spent $25,400 on accommodation and food, $42,400 on airfares and almost $14,000 on ground transport, while pocketing about $6000 in advances and for minor and related expenses in the fortnight.

It does not compare well to other delegates on the same trip. Liberal MP Nola Marino spent $21,300, while Labor MPs Glenn Sterle and Tony Zappia spent $18,666 and $13,249 respectively.

A statement from the Speaker’s office says all charter transport used by Ms Bishop was “in accordance with the guidelines and within entitlement”.

For some, this suggests the entitlement guidelines are broken.

The Department of Finance protocols state that charter transport can be approved by the Special Minister of State “where no scheduled commercial services exist or a senator or member would be unduly delayed by the use of scheduled services”.

Given that she had to be transferred around airports, the question of whether Ms Bishop actually saved any time comes down to a matter of minutes.

Ms Bishop took the charter helicopter from a Melbourne airport after landing on a commercial service from Queensland, and reports say she was allowed to take the ludicrously expensive hour-long trip on a private chopper due to her “office holder duties”.

“I have no idea how Bronwyn Bishop can justify this extravagance,” Labor MP Pat Conroy told The Australian.

“If I went to a pub in my electorate and said I’d charged $5,000 to fly to a fundraiser when a government-funded car could have gotten me there, what would they say?”

The Labor-aligned independent was crucified by the LNP for billing taxpayers $97,000 for a 30-day trip to the US, South Africa, Uganda, Britain, Hungary, Russia and Kazakhstan in early 2012.

Former Labor speaker Anna Burke’s most expensive overseas trip was a 16-day excursion to Ecuador, Brazil and Paraguay in 2013, which cost the public $58,700.