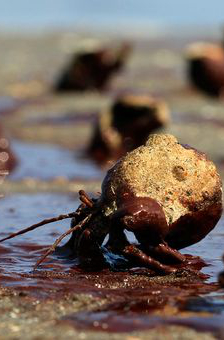 The settlement with the US Department of Justice increases the pre-tax cost of the explosion on board the Deepwater Horizon rig by about $US13.1 billion to $US70.5 billion, the company said.

The US Government welcomed what it calls a record deal, while in London BP's share price rose 4.49 per cent after the announcement.

“The board has balanced the risks, timing and consequences associated with many years of litigation against its wish for the company to be able to set a clear course for the future,” BP chairman Carl-Henric Svanberg said.

“With this agreement we provide a path to closure for BP and the Gulf.”

US attorney-general Loretta Lynchsays it will take several months to finalise the deal, including public comment.

“If approved by the court, this settlement would be the largest settlement with a single entity in American history,” Ms Lynch said in a statement.

“It would help repair the damage done to the Gulf economy, fisheries, wetlands and wildlife, and it would bring lasting benefits to the Gulf region for generations to come.”

The deal was struck with the US Federal Government and the states of Alabama, Florida, Louisiana, Mississippi and Texas, whose economies still suffer in the fallout of the disaster in 2010.

Eleven people were killed and millions of barrels of oil were poured into the Gulf region, devastating wildlife and the ecology of a region that is largely dependent on seafood and tourism industries.

“This is a realistic outcome, which provides clarity and certainty for all parties,” BP group chief executive Bob Dudley said.

“For BP, this agreement will resolve the largest liabilities remaining from the tragic accident and enable BP to focus on safely delivering the energy the world needs.”

BP, which owned 65 per cent of the drilling site being tapped by the Deepwater rig, has sold off billions of dollars in assets and slashed jobs to meet the big clean-up bill.

BP CFO Brian Gilvary says the payments will be spread out over years, so the company can pay out at a “manageable” rate of about $US1.4 billion a year.

Finally, up to $US1.3 billion will pay for claims made by over 400 local government entities.

Some private companies will still have the option of suing BP for loss and damages.