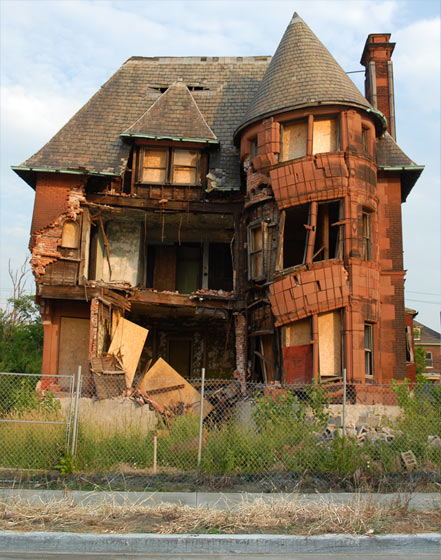 The US city of Detroit has taken the dubious honour of being the largest city in the country’s history to file for bankruptcy, drowning in a debt of $US18.5 billion.

Known as ‘Motor City’ and once considered the industrial capital of the nation, Detroit has dwindled to a shadow of its former population and productivity. The 1.8 million people that lived there in 1950 have mostly taken flight for the safety of suburbs or other cities, with the metropolitan population dropping to 685,000 today.

The city’s coffers have been empty since financial crises crippled the automotive industry, leading to many leaving the city and tax revenue dropping to almost nil. In official papers filed with Michigan courts, it was revealed the city has an annual deficit of around $US400 million.

Michigan Governor Rick Snyder said in a letter accompanying the court filing: "The only feasible path to a stable and solid Detroit is to file for bankruptcy protection... the citizens of Detroit need and deserve a clear road out of the cycle of ever-decreasing services [due to] the fact that the city cannot and is not paying its debts as they become due, and is insolvent."

The Governor says there are a huge amount of problems plaguing the embattled city, including: the highest homicide rate in 40 years; an average hour long wait for emergency services; no funds for repairs and maintenance of police cars, fire trucks and ambulances; 78,000 abandoned homes and only 60 per cent of the street lights function.

The city's two pension funds for Government employees are suing over moves to cut retiree benefits; there are claims they are underfunded by $US3.5 billion. The city of Detroit has assured workers their paycheques will be delivered.