Drink tax could drive down addiction 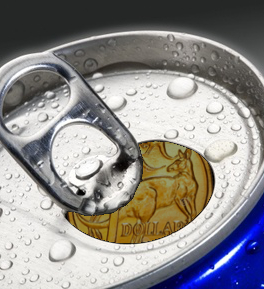 A tax on sugar-sweetened drinks would be an effective way to improve the health of heavy consumers, new research shows.

Monash University researchers compared the impact that a 20 per cent sales tax and a 20 cents per litre excise tax on sugary drinks would have on moderate and high consumers.

Lead author Dr Anurag Sharma, of the Centre for Health Economics, said there was a perception in policy circles that extra taxes would have little impact on the addictive or habitual behaviour of heavy consumers of sugar-sweetened drinks.

But the research showed this was not the case.

“Although high consumers of sugar-sweetened beverages have the least elastic demand, they drink so much that they are up against household budget limits, and therefore adding tax would bring down their consumption,” Dr Sharma said.

“From that would flow the increased health benefits achieved by a lower sugar intake.”

The study found that an excise tax was more effective than a sales tax of similar levels at reducing consumption rates, especially for heavy drinkers.

“Heavy drinkers are more likely to purchase discounted or multipacks so adding a 20 cents per litre excise tax to these beverages would mean a bigger price increase than a 20 per cent sales tax,” Dr Sharma said.

Adding the tax to all sugar-sweetened drinks would mean only a small financial burden for those who drank them at low or medium rates.

The findings are published in Health Economics.