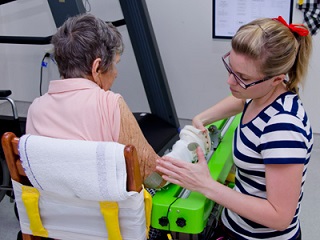 Researchers at north Queensland universities have reportedly been fending off waves of interest in their new robot arm for stroke suffers.

Medical and engineering faculties across campuses have come together to create a device called the SMART arm, which will be brought to market soon. The robotic arm assists stroke and other injury sufferers to regain mobility of their upper limbs at an increased rate compared to traditional therapy.

Townsville-Mackay Medicare Local, the University of Queensland and James Cook University have formed a start-up company - SMART Arm Pty Ltd - which was recently awarded about $200,000 to help get the product through its prototyping phase.

Researchers are currently working on the fourth iteration of the arm, which should now be able to pass industry standards for sale.

James Cook University's (JCU) Andrew Leech says the school has had hundreds of interested callers about the device since it was featured in a television documentary earlier this year.

Strong results from early tests have helped bring the robotic arm this far, with the SMART Arm showing a 50 per cent improvement in patients’ limb function over a four-week period, compared to nine weeks of a standard rehabilitation program.

More information is available from the SMART Arm site.