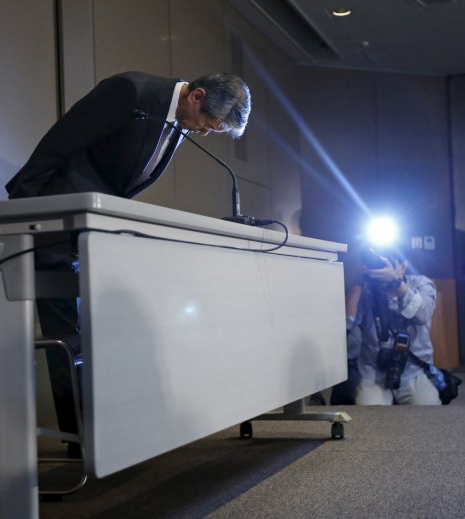 The president and former president of tech firm Toshiba have resigned over a $US1.2 billion accounting scandal.

The president Hisao Tanaka and his predecessor Norio Sasaki resigned over the furore that is being blamed on Toshiba management's overzealous pursuit of profit, a scandal that has battered one of Japan's best-known firms.

The two men are among eight executives and directors at the massive conglomerate to fall on their swords after an independent report found senior management complicit in a scheme to inflate profit reports that ran for several years.

A report by an outside investigator brought in by Toshiba said managers “systematically” padded profits over several years.

It painted a picture of management staff wielding immense silencing power over lowly underlings, allowing their corrupt quest for profit to trickle down through the enterprise.

“Inappropriate accounting was systematically carried out as a result of management decisions ... betraying the trust of many stakeholders,” a summary of the report says.

“Toshiba had a corporate culture in which management decisions could not be challenged.”

“It has been revealed that there has been inappropriate accounting going on for a long time, and we deeply apologise for causing this serious trouble for shareholders and other stakeholders,” the company said in a statement.

“Because of this Hisao Tanaka, our company president, and Norio Sasaki, our company's vice chairman ... will resign.”

Mr Sasaki was Toshiba president from June 2009 to June 2013; most of the period during which the dodgy profit reports were made.

Toshiba shares jumped following the release of the report this week, as the company ended months of uncertainty about the extent of the accounting problems, and who was to blame.

Toshiba has more than 200,000 employees globally and also operates in power transmission and medical equipment.

Among the divisions affected by the inflated profits are the infrastructure, audio-visual and semiconductor businesses, the summary said.

Toshiba’s 200,000 employees have roles in everything from televisions and electronics to industrial power transmission and medical equipment.

Managers at the company’s infrastructure, audio-visual and semiconductor divisions were among the main drivers of the scam, the summary said.