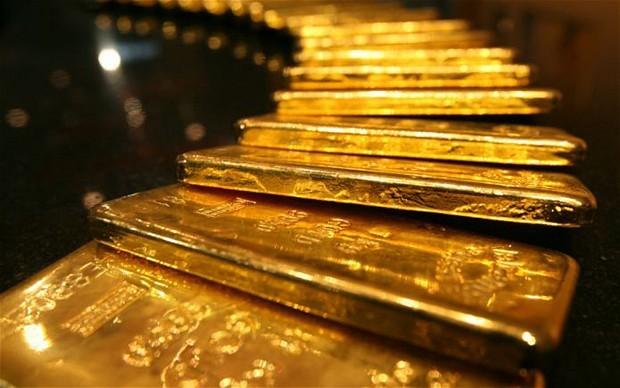 The value of gold has dropped to its lowest point in nearly five-and-a-half years, hit hard by fears of massive selling in China, dealers say.

The precious metal slumped to $US1,072.35 in Asian trade overnight - its lowest point since February 2010 – below the key psychological barrier of $1,100.

In Shanghai, around 5 tonnes of gold passed through gold exchange in just two minutes.

The market normally sees about 25 tonnes traded in an entire day, ANZ says.

Dealer Nick Rose from trading firm TradeNext has told reporters that the latest price slump was sparked by the rampant offloading by Chinese sellers.

Victor Thianpiriya, a commodity strategist with ANZ, said in an ABC interview that the gold price movements “suggested speculation or forced selling in time of low liquidity”.

Gold was already sliding before this week, after its value was reduced by the strong US dollar.

“Gold dropping so sharply is a surprise and while the reports that China gold reserves were half the expected level might have inspired additional selling pressure, it is the repeated comments of commitment from the Federal Reserve that they will begin raising US interest rates at some point this year that have continuously pressured gold in recent months,” FXTM analyst Jameel Ahmad said.

China's official gold reserves are up by almost 60 per cent over the past six years, with the People's Bank of China saying bullion holdings rose to 1,658 tonnes as of the end of June, from 1,054 tonnes in April 2009.

But this announcement has done little to lift gold prices.

Mr Thianpiriya expects the value of the precious metal to continue to fall.

“Gold is going to struggle in an environment where you have a rising US dollar and rising interest rates,” he said.

Other precious metals are at multi-year lows this week as well, with silver at its lowest level in nearly six years ($14.54 per ounce), and platinum at a six-year low of $946.25 an ounce.