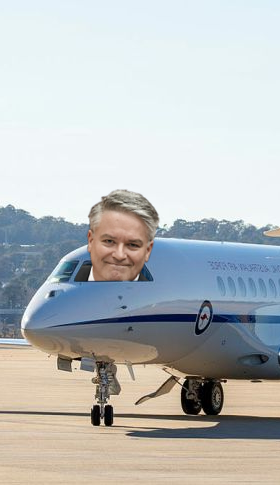 Outgoing finance minister Mathias Cormann is flying around Europe on a private RAAF jet to bid for a new job at the OECD.

Mr Cormann has quit the Senate to run for election as president of the Organisation for Economic Co-operation and Development (OECD).

He is meeting with leaders across Europe as part of his campaign, flying on an RAAF plane at a cost to taxpayers of around $4,300 or every hour of flying.

The Prime Minister has defended his jet-setting sometimes-colleague, saying Mr Cormann needs his own plane because coronavirus is “running rampant” across Europe.

“There really wasn’t the practical option to use commercial flights in the time we had available because of COVID,” Scott Morrison told 2GB radio on Wednesday.

“If Mathias was flying around on commercial planes, he would have got COVID. The risk of that was extremely high.”

Mr Morrison says the money spent - set to be in the millions by the time the trip is over - is justified because Australia has never held a leadership role at the OECD; an organisation whose member countries collectively comprise about 62.2 per cent of global GDP.

Taxpayers are also funding a team of around 8 staff working 24/7 from the Department of Foreign Affairs and Trade (DFAT) to manage Mr Cormann’s globetrotting campaign, dubbed the ‘COVID Contiki’.

The government says it will not divulge the exact costs of Mr Cormann’s campaign, because it believes that knowing how much Australia is spending may erode some competitive edge against the 10 other candidates vying for the OECD position.

Mr Cormann will be interviewed for the position of secretary-general by OECD member state ambassadors in France at the end of his trip.

He may be relying on short memories or forgiving attitudes among some of his European counterparts, who have been frustrated in the past by Australia’s refusal to engage in carbon markets or undertake meaningful emissions reductions.

The OECD’s membership is dominated by European countries with more ambitious emissions reduction commitments than Australia.

But still, Mr Cormann has sent out a “vision statement” for the position, which has been obtained by reporters, in which he says “effective global action on climate change is a must and we must get to zero net emissions as soon as possible”.

Australian Greens leader, Adam Bandt, has also written to each nation voting in the OECD process, warning them that appointing Mr Cormann as secretary general would be “a blow to tackling climate change”.

Labor supports Mr Cormann’s nomination. However, Labor Senate leader Penny Wong says that if the former finance minister is ultimately rejected by selectors; “I would venture this view, which is that the fact that Scott Morrison has been so isolated on climate, refused to be part of the solution, simply continues to be part of the problem – that would be a big reason why.”