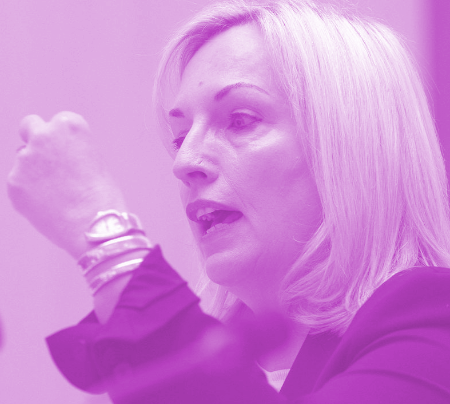 The communications minister has been accused of being unusually involved with Australia Post.

Seven months ago, Ms Holgate was pushed out of Australia Post by intense pressure from the government over the awarding of four Cartier watches, worth almost $20,000 in total, to senior executives in 2018.

Prime Minister Scott Morrison called for Ms Holgate to stand aside, but Ms Holgate insists she never agreed to.

She says her treatment by the government could amount to workplace bullying.

Australia Post says it will participate in mediation with Ms Holgate about her resignation. At the same time, she is engaged with a war of words against Mr Fletcher.

Ms Holgate has told reporters that Communications Minister Paul Fletcher was “unusually very highly engaged” with the running of AusPost during her time as CEO - much more than his predecessors.

“Press releases would need to be approved by the minister's office.”

Mr Fletcher says his dealings with Australia Post were no different to normal practice.

“The Commonwealth government is the 100 per cent shareholder,” he told reporters.

“We're also the regulator of Australia Post, and so government has other roles in addition to its role as the 100 per cent shareholder. But no, there's nothing inappropriate at all in the way that I dealt with, and the government dealt with, Australia Post and its chair.”

The final report of a Labor/Greens-led Senate inquiry into the Holgate dismissal criticised Mr Fletcher’s interventions too.

The report said the Solicitor-General should investigate the legality of the instruction given by shareholder ministers to stand Ms Holgate aside.

The Federal Government says it has “no intention of involving the Solicitor-General in this matter”.

The committee's report also called for efforts to “restore an appropriate level of independence to the board”.