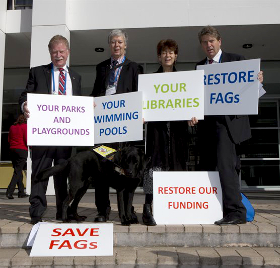 A conference this week has brought together many of the people who bring real government to peoples’ everyday lives.

The 2014 National General Assembly of Local Government has been an opportunity for authorities to talk about actual local needs, challenges and opportunities.

The conference was on in Canberra, and this year focused largely on the changing relationship between the tiers of government.

The new Federal Government has promised a comprehensive review of the Federation.

In his book, Battlelines, Prime Minister Tony Abbott discussed his views on the States and the Federation. He says his concern is that in the Federation “...often the states have the legal responsibility for issues that only the federal government has the political authority and financial muscle to resolve”.

The Government’s development of a Federation White Paper focusing on roles and responsibilities of the levels of government will have a major impact of federal financial relations.

Local government authorities from across Australia also used the Assembly to voice the strong need for federal Financial Assistance Grants to be indexed against inflation.

The call comes after the Federal Budget put a freeze on Financial Assistance Grants.

There are concerns that the changes will rip money from a range of local government services such as a school and libraries, disaster response, and make the unable to maintain financial stability.

Governor-general Sir Peter Cosgrove was among the speakers, congratulating many regions on their efforts to improve the lives of residents, and calling for worthy representatives to nominate for the Order of Australia.

And finally, the Government recognised another year of big local government achievements, naming six category award winners and Latrobe City Council as the winner of the 2014 National Award for Excellence in Local Government.