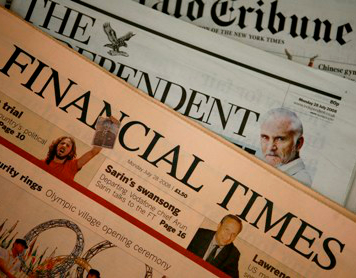 The Financial Times – a globally-renowned money media outlet – has been to Japanese digital media group Nikkei in a $AU1.8 billion deal.

It is the biggest acquisition by a Japanese media organisation and is a big win for Nikkei - the employee-owned firm from which the name of the main Japanese stock market index comes.

Pearson said in a statement that it was the right time to offload the Financial Times, which was first printed on pink paper in 1893 to stand out from rival titles.

The Nikkei newspaper is considered a must-read for financial and business news in Japan, and now hopes to break out of its home market.

“I am extremely proud of teaming up with the Financial Times, one of the most prestigious news organisations in the world,” Tsuneo Kita, chairman and group CEO of Nikkei, said.

Insiders have expected Pearson to sell the trophy asset for years, but most expected a deal would be made with Bloomberg or Thomson Reuters.

When the news broke, a Financial Times journalist tweeted a photograph of staff in the newsroom crowded around a television, learning of the developments.

But the sale of the FT Group did not include its 50 per cent stake in The Economist magazine, nor the headquarters of the newspaper on the banks of the River Thames in London.

“It is hard to argue with the price,” says Richard Marwood, senior fund manager at AXA Investment Managers, a Pearson shareholder.