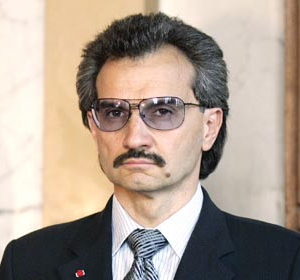 The prince says his pledge is “maybe ... the first such big announcement” of its kind in the region.

He claims the massive fund “will be allocated according to a well-devised plan throughout the coming years”, stressing the fact that there was no time limit for the donation to be spent.

The prince will head a board of trustees tasked with spending the funds after his death “for humanitarian projects and initiatives”, modelled on a charity established by Microsoft founder Bill Gates in the United States.

The 60-year-old magnate is a nephew of Saudi Arabia’s King Abdullah, who died earlier this year.

Prince Alwaleed is known for his comments about social and economic issue, which are considered unusual as he holds no government office.

He owns Kingdom Holding, a firm with interests ranging from media services to the Euro Disney theme park, the Four Seasons hotels and Citigroup.

The prince is also behind a plan to build a tower in the Red Sea city of Jeddah that will stand at more than one kilometre tall.

Prince Alwaleed says he has already donated $US3.5 billion over the last few decades through Alwaleed Philanthropies.

His charity provides access to houses and electricity for isolated Saudi communities, among other projects around the world.

He says he wants to institutionalise the process for distributing his vast wealth “so they can continue after my lifetime”.

His son and daughter Prince Khaled and Princess Reem are expected to take the roles of be president and vice-president of the charity after their father dies.

“I believe that a person should take dramatic and drastic decisions at his peak,” Prince Alwaleed said.

He says he will certainly be around long enough to get the process started.

“I assure you my health is good.”