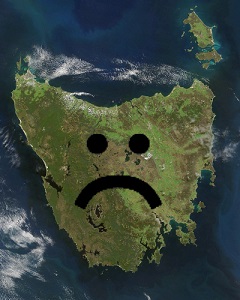 Tasmania has recorded a period of negative growth, with the latest figures showing the ailing state may be in a recession.

The latest figures from the Australian Bureau of Statistics show Tasmania is the only state in Australia to post negative growth rates for the 2012-13 financial year, recorded at -0.6 %.

The figures are the first negative Gross State Product from any state since 2000.

The dip has been primarily driven by a 5.7% drop in retail trade. It has not been helped by diminished productivity in the construction, agriculture, forestry and manufacturing industries.

Tasmanian Premier Lara Giddings says the figures are five months out of date and do not reflect the current state of economic play.

“We've seen the softening in construction and other parts of the economy, but in more recent times we've actually started to see that turn around, we're seeing retail spending strengthening we're seeing confidence strengthening,” Giddings said.

A considerable boost to the state’s first home builder's grant has injected new life into the economy, she says.

The Tasmanian Opposition has leapt on the figures, saying they knew it was coming.

“We are the only state in the country whose economy has contracted over the last 12 months and it's as a direct result of the Labor Green minority government, this is the recession, the Labor-Green recession that Tasmania didn't need to have,” Shadow Treasurer Peter Gutwein said.